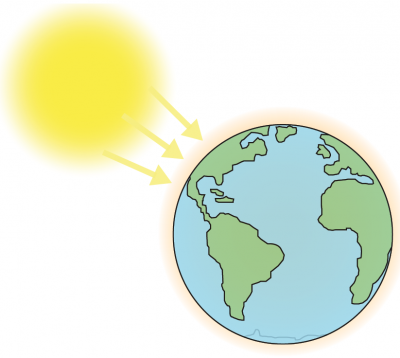 The consensus among climate scientists is that the global warming trend is due human to addition to the greenhouse gas effect. Analogous to a greenhouse in a garden, the Earth traps the heat of the sun in its atmosphere.

Certain gases in the atmosphere block heat from escaping. Long-lived gases that remain in the atmosphere and do not respond physically or chemically to changes in temperature are described as the cause of climate change.

The primary gasses that contribute to the greenhouse effects include: Carbon dioxide, Methane, water vapor, nitrous oxide, and chlorofluorocarbons.

Water vapor is the most abundant greenhouse gas. It acts as an extremely influential “feedback” to the climate. As the Earth’s atmosphere warms, the amount of water vapor increases, resulting in an increased chance of clouds and precipitation.

Carbon dioxide (CO2) is a very important component of the atmosphere. CO2 is released through natural processes such as respiration, volcano eruptions and through human activities such as deforestation, land use changes and burning fossil fuels. Humans have increased atmospheric CO2 concentration by more than a third since the Industrial Revolution began. This increase in CO2 has been directly correlated with a global increase in temperature.

If you want a picture to show with your comment, go get a gravatar.