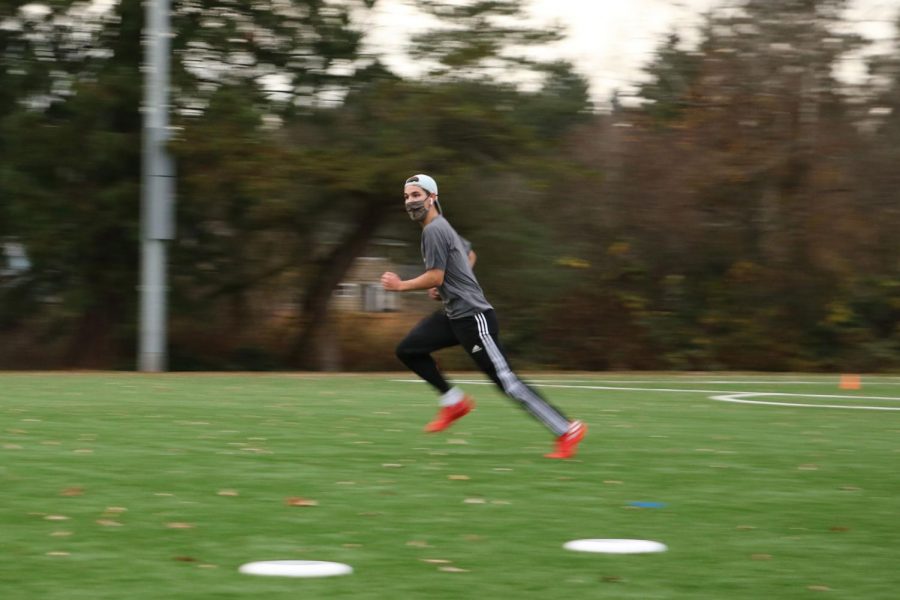 By Matthew Sage and Frank Higley

University Prep adopted a new POD system for school sports as a replacement for the fall season, minimizing the risk of exposure to the coronavirus.
A single POD consists of no more than six athletes and their coach, as per the Washington Interscholastic Activities Association regulations. PODs run for an hour and are first come first serve.

“We average[d] … between 25 and 30 PODs a week,” Athletic Director Rebecca Moe said. “I’m just super thankful we’ve been able to do it, we’ve had the resources to do it, we’ve had the staff who’d want to do it and that people trust us.”
Moe is very pleased with how the PODs work.
“I’m hoping that this is a model for other programs to use,” Moe said. “For some of our new students, it’s been great for them to meet people at UPrep… The feedback has been overwhelmingly positive”
The switch to a POD system came after typical practices were canceled last spring during the state shutdown.
“The energy was really high and we were hoping for a good season,” coach and PE teacher Kayla Robertson said about their spring season. “We had so many things planned… So to see the season be postponed then canceled was really hard… But I think what’s hardest is for those seniors who didn’t have another opportunity to [participate].”
Robertson coached up to four cross country and track and field PODs per week during the fall season. She said practices were more relaxed after the WIAA prohibited competitions.
“Right now our goal is not to compete and win state championships,” Robertson said. “Right now our goal is to help support physical and mental health and community, and that sense of hope for the future.”
Students appreciate their coaches’ efforts in sports PODs.
“I think it’s the best method [for training right now]. We’re getting out on the field. We’re seeing other teammates,” senior and varsity girls soccer player Ezra Kucur said. “It’s better than nothing, but it’s not a replacement for a season.”
She was less excited about the actual training.
“We’re doing a lot of passing and footwork drills, which, like, it’s fine. It’s obviously not soccer in its truest form,” Kucur said.
Sports PODs were suspended until Dec. 4 after Governor Jay Inslee passed new restrictions on social gatherings on Nov. 16.
Senior Liam Reese has played ultimate frisbee at UPrep for seven years. Reese said he has not been able to play ultimate for over six months since COVID-19 cut his club season short last spring.

“I was really excited to jump at the opportunity to play at all, which the PODs gave me,” Reese said. “And I’m still hyped. I know, personally, it’s given me some motivation to keep working out, cause I’ve struggled without the reward of getting to play, so it’s been really nice.”
Reese said he also appreciates the social aspect of the PODs.
“[I most enjoy] being able to throw the frisbee with some of my teammates and not just see them through a screen,” Reese said. “It’s really fun, I definitely recommend it. ”