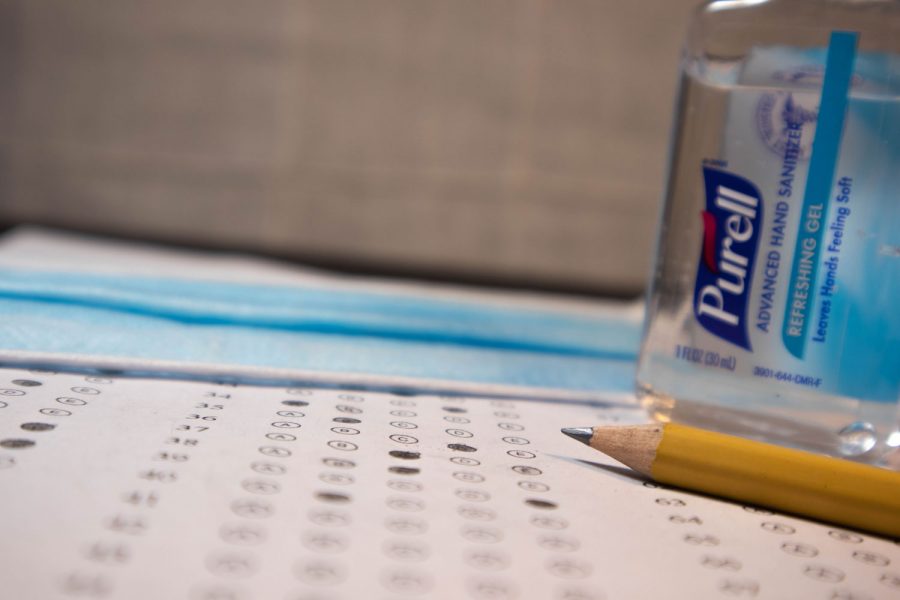 UPrep students gathered on-campus to take the SAT and ACT on Oct. 14 and 20 respectively.

On-campus standardized tests are a new occurrence for UPrep seniors, who were scheduled to take their SATs and ACTs last spring at off-campus testing facilities. But safety concerns over COVID-19 closed those facilities, causing many complications for students applying to colleges.
“[Students] had prepared for these exams. They were set to take them,” Director of College Counseling and Student Services Kelly Herrington said. “It’s just been this cycle where they sign up, get prepared, do their test prep, and then it’s canceled.”
In some cases, students only found out the day before that their tests were canceled, Herrington said.
“We have students who’ve had their tests canceled eight times,” Herrington said. “And that’s just a lot of disappointment and a lot of frustration, but I’m proud of how our students have rolled with it.”
The College Counseling department worked to facilitate the on-campus SATs and ACTs for Oct. 14 and 20 respectively. Students were required to wear face masks and were spaced at least six feet apart.

Herrington doubted King County standardized test centers would reopen this fall. But by hosting on-campus tests, he said, students can have at least one score to submit for their applications.
Because of many students’ difficulties finding a test date, many colleges have dropped the requirement of test scores on applications for this application cycle, and potentially the next. Herrington is a supporter of this change.
“It takes the pressure off students,” Herrington said. He said students are able to decide whether or not their test scores work well with the rest of their application and represent what they are truly capable of.
Senior Ian Beck thinks this decision from colleges is a good idea. He says the ability to choose whether or not to submit scores allows students who may have scored poorly on their tests to apply to schools with a higher historical median score.
“You don’t have to worry about having a perfect score to submit,” Beck said. “You can just make the rest of your application is strong and still have a good chance at getting in.”