Senior graduation plans on hold due to COVID-19 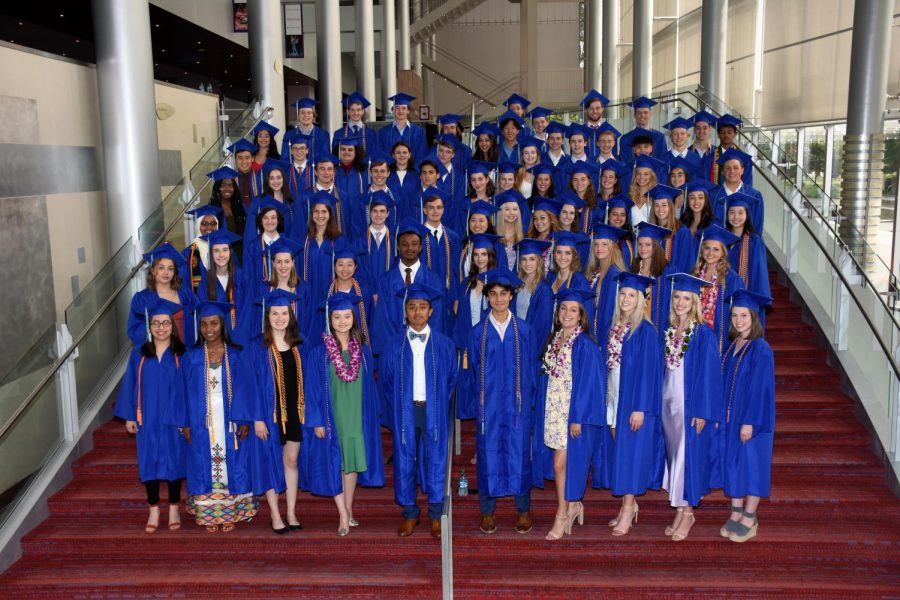 The Class of 2019 poses for a photo at their graduation last June. Traditionally, the outgoing senior class graduates in a June ceremony at McCaw Hall.

With University Prep closed for the remainder of the school year, seniors have lost out on the classic spring semester experience.

After college decisions are made, spring is typically a time for outgoing seniors to relax before graduation in June. However, due to the COVID-19 outbreak, that ideal end to the year has been taken from the senior class.

Senior Anjali Choudhury was hit hard by the loss of the joyous spring semester.

“This was the semester that, personally, I had been waiting for since my first day of high school, so that was really hard to process,” Choudhury said.

With the uncertainty around the virus and when Washington can reopen, plans for senior graduation are far from concrete. The administration is considering a few different options. UPrep sent a survey to senior families asking if they would prefer a Zoom ceremony in June if an in-person graduation could not be held or an in-person ceremony in August.

“80% said they wished to wait for a ceremony in-person once the virus clears up,” Assistant Head of School and Director of Upper School Ken Jaffe said. “I think we’re at a point now where we’ll do something in June that recognizes the seniors in some way but with hopes that we can, in the first or second week of August, do some kind of in-person ceremony.”

Senior Emily Lyons-Hammond is hopeful that an August ceremony would give seniors the chance to really celebrate their accomplishments.

“I mean, look at what we have accomplished,” Lyons-Hammond said. “To just put it through Zoom and mail you your diploma, that feels pretty insignificant and doesn’t really show how much work was put into these four years.”

Lyons-Hammond also noted that it wouldn’t be the same if close friends and family members couldn’t attend.

“I also think a huge part of any life event is family and friends, and I think we miss out on a lot of that if we tried to rush it,” Lyons-Hammond said.

“I would say there’s limited options. It would probably be a Friday evening or a Saturday in the Pumadome,” Jaffe said.

Jaffe noted that baccalaureate has been held in the Pumadome previously, but mentioned the potential issue of attendance for a Thanksgiving ceremony.

“There’s some people, for a variety of good reasons, who couldn’t attend. But I think we would get good attendance, and I think the class would be excited about going through the ritual of commencement,” Jaffe said.

Choudhury thinks that a Thanksgiving option might not be the best bet.

“I don’t know if I love the idea, just because I feel like at that point we’re already done with high school. And so, going back to that would be really odd,” Choudhury said.

“If that’s what it comes to, [then] that’s what has to happen. I’m not personally a fan of that because I feel like we all will have moved on and it won’t be that big of a thing anymore. It would be nice to just go do something because I know it means a lot to some people,” Funes said.

Amidst the uncertainty, history teacher and senior class dean Pat Grant is trying his best to aid the seniors in their duress. Grant sent out a letter of encouragement and began weekly meetings to play Kahoot, an online game. He also organized a senior circle for seniors to talk to each other for short periods of time in breakout rooms, rotating every few minutes. Over 55 seniors attended the senior circle meeting.

“I made the meetings optional, so I’m not taking attendance, and the idea is just to get together and just say, ‘Alright, let’s have a conversation,’” Grant said.

“I would say that it’s helping. We all find it enjoyable, and it’s a way to stay connected to our classmates, especially the ones we normally wouldn’t be texting or talking to at all,” Funes said.

Senior and ASB President Michael Gary is working with Grant and others to produce some positive memories for the seniors.

“So many small things are in the works. I had meetings with [College Guidance Counselor] Kelly Herrington, and we worked on creating a virtual college map, just to replicate what’s usually in the hall,” Gary said.

On May 1, Gary and Herrington hosted a Zoom event for seniors in which seniors wore their college sweatshirts, added their names and colleges to a virtual map and created s’mores with supply packets that were sent to seniors’ homes.

“It was really nice to see where everyone was going, and when I got my s’more package it was really cute. It just shows that they still really care and love us,” Choudhury said.