Jerome and Theo get coffee with cats 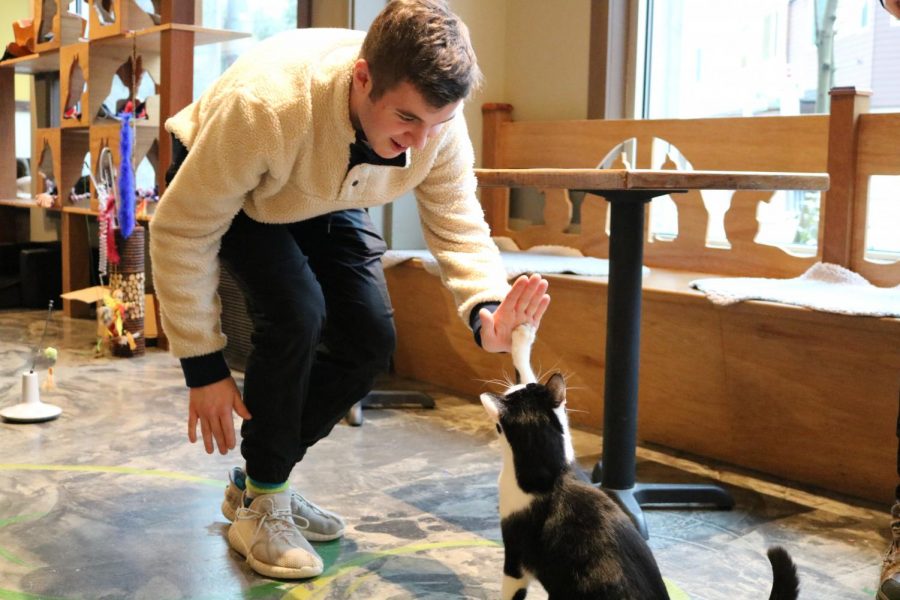 Penguin, one of the many trained cats, giving Theo a high five

By Theo Mahlum and Jerome Todd

Walking in, we noticed both a lack of mew-sic or the comfortable chairs you might expect at a typical coffee shop. Instead, the cafe appeals to a different audience with its cat-ear-headband-wearing employees, cat-pun-decked menu and board games (including Cat-opoly). Because of the cafe’s tall glass windows both, customers are able to watch the a-fur-able cats in action from both in and outside of the cafe— a distraction to anyone attempting to study for an upcoming test. But for anyone looking for a break, the Meowtropolitan Cafe presents the purr-fect opportunity to fur-get your issues and simply enjoy cat puns.
The Claw-ffee

After looking at the menu, we ordered their Meowca and Catpuccino — two of the many cat-themed drinks and food items. Our drinks came fast, and they were included in the cost of our reservation for the cat-dom. Each drink came with a purr-fectly designed cat drawn on top to resemble a cute feline friend. Un-fur-tunately, the coffee was nothing special. The meowca tasted of mainly chocolate–as if they had forgotten to add coffee. And while the cat-puccino tasted like coffee, it was underwhelmingly bland.
The Cat-dom

As fur the cat-dom, the room in which all of the cats live, it abs-purr-lutley did not disappoint. The cafe modeled the room after a medieval kingdom with the cats even having their own crest. Purr-prisingly, most of the cats were trained. One cat in purr-ticular, Timothy, could roll over and play dead. The cats all had their own unique personalities. We went from watching a cat run on a giant hamster wheel to another conforming to cat-pitalism by sitting inside of an Amazon box. All the while, cats would be running above our heads on sky bridges or chasing their many toys. There are fifteen cats. With some being permanent to the cat-fe but many others being up for adoption! Since opening in 2016 the cat cafe has helped find homes for 248 cats.
Our Verdict

To be fur, we would not suggest visiting the Seattle Meowtropolitan for any reason other than the cats. The Seattle Meowtropolitan could be everything mew are looking for, or a mew-r worst nightmare, depending on what mew desire in a coffee shop. It’s not a place we see ourselves studying, nor is the coffee particularly good, but we still loved the two hours we spent there and received more enjoyment than we pur-ceived.