Sophomore Sarah Bunker competes at a high-level as a multi-disciplinary figure skater. 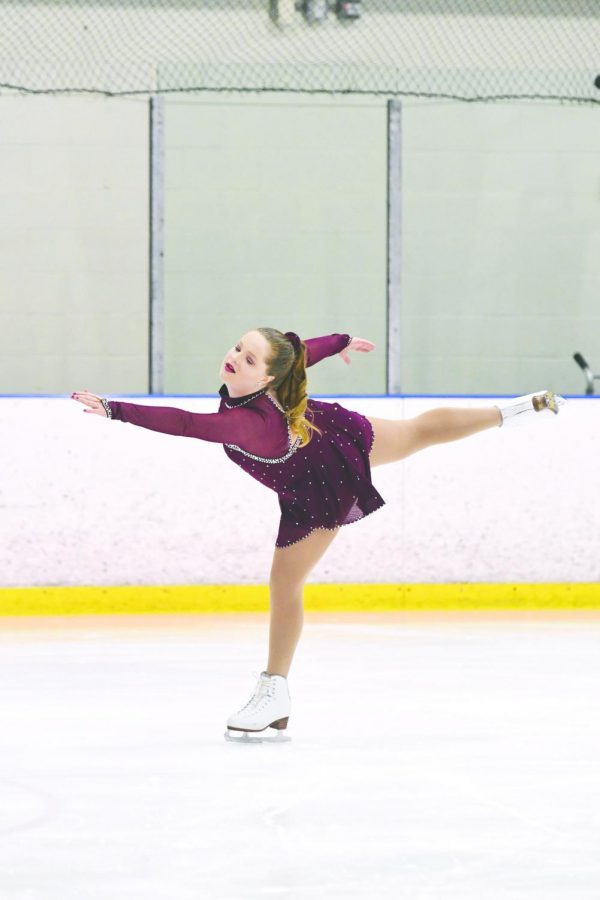 Sophomore Sarah Bunker performs a right forward outside edge spiral on the ice at a solo skating competition.

For sophomore Sarah Bunker, figure skating is not just a sport or an art. It is both.

“It is a form of expression that has both an artistic lens combined with an athletic side to create a storyline,” Bunker said.

Bunker is a multi-disciplinary figure skater. Her passions within the larger umbrella of figure skating include synchronized skating, solo skating and dramatic showcase, which is a form of skating that brings together artistry and skills to produce one large piece.

“One of my favorite things about skating is that I am able to participate in different skating disciplines that include a wide variety of skills, such as conveying stories through skating with dramatic showcase while also competing,” Bunker said.

Synchronized skating involves a team of skaters who all skate together. There are about 16 to 20 skaters on a team, and typically the programs have themes that are comprised of the skaters forming different shapes and elements. Skaters are graded on technical difficulty, artistry and execution.

When Bunker competes in synchronized skating competitions, she and her teammates have identical, costumes, hair and makeup. Bunker’s first ever competition was a “Beauty and the Beast” theme with waiter costumes to “Be Our Guest,” a popular song from the movie. At the moment, Bunker is preparing for a competition with a Queen of Hearts theme.

Her dedication to synchronized skating is apparent considering that she wakes up before 4 a.m. on Wednesday for 4:45 a.m. practices and before 5:30 a.m. on Sundays for 6 a.m. practices.

“I actually don’t mind waking up so early for practice because I love being out on the ice, and does not always seem as early as it really is,” Bunker said.

On top of this, she practices solo in the afternoons about five to six times a week. Two coaches train her in moves in the field which is focused on basic skills such as spirals, and freestyle.

“I think that competing in different disciplines is really cool because I get to see different skaters from around the country to better my own skating, and it can be nice to bring out my competitive side,” Bunker said.

Bunker began skating when she was about four years old.

“I began skating because my sister was, but I quit because I was scared of the older girls,” Bunker said.

She rediscovered her passion about nine years later as a fifth-grader and fell in love with the sport.

Currently, Bunker is working on a program which will showcase jumps, spins and other technical aspects by combining footwork, artistry and freestyle elements